Amy Lawrence is a Manchester-based interdisciplinary artist, curator and facilitator with projects involving the creation of participatory situations and events in various settings from the gallery to site specific settings and theatre spaces. Amy is also the co-founder and curator of LEGROOM, a nomadic space for expanded approaches to liveness through movement and visual arts, having recently directed a space in Manchester City Centre with an 8 month programme of international and local platforms, residences and public workshops (supported by Castlefield Gallery.) Projects span a range of outputs often involving socially engaged and diverse programming, Amy is also currently the Young board representative for MIF and an Associate Lecturer for ‘Contextualising Practise’ at Manchester School Of Art, roles which influence the satirically educational and discussion based frameworks of projects . Amy’s practice uses the convergence of the workshop, curatorial and creative structure, within low-fi visuals and choreographed physicality often exploring the intersection of live and visual physical improvisation processes and forming playful ethnographic investigations situated alongside everyday experiences of objects, space and other bodies. Situations are self-reflexive upon the structures of art, sharing the glitches in these ‘sharing’ frameworks. Choreographed interventions manipulate the notion of ‘performed liveness’ and play, often working with varied groups of participants to create physical situations and challenging the associations of dance with learnt athleticism, ‘inner’ rhythm and ‘natural creativity.’

A series of scored conversations between Black and Minority Ethnic young women and the artist, Amy Lawrence. The first iteration of this project was created with support from Divergency and featured participation by artists Henrietta Phoebe Dunn and Diana Tap. The project took the form of a Skype conversation, photo booth video, video diary by the artist, recorded phone calls shared between the artist and the participants after they had recieved a score to follow via email, creating a series of abstracted conversations concerning race and gender that took place in the homes of the participants over 1 hour. The resulting footage and audio was then edited into a 20 minute video and shown to the Divergency cohort. In this work Amy is investigating temporary structures for ‘connecting’ using basic technology and how we might attempt to connect with our own personal histories in a similar way alongside the ciclical nature of viewing. 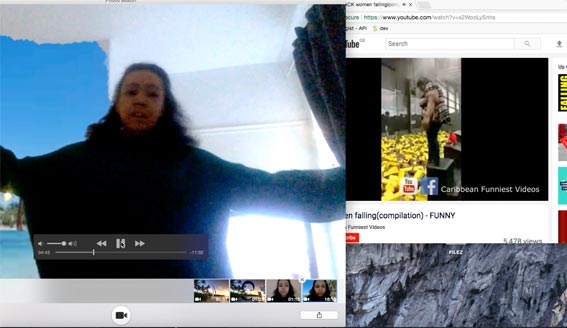 Developed as a Divergency micro-commission with support from hÅb + STUN (Sustained Theatre Up North). Supported using public funding by the National Lottery through Arts Council England.